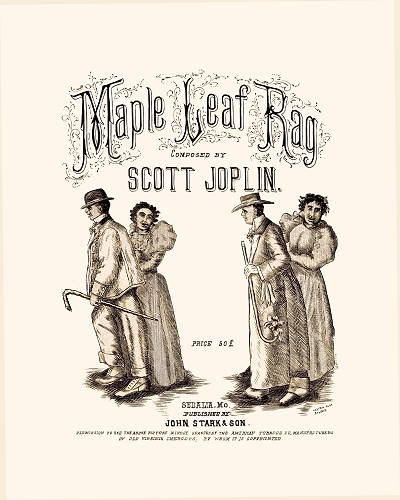 It’s a truism among piano teachers that the average piano student can’t wait to play Scott Joplin’s The Entertainer. And while The Entertainer’s first two sections are undeniably catchy and memorable (particularly if you’ve heard the local ice cream truck blare it incessantly on a summer afternoon), as a whole it’s far from Joplin’s best rag. It’s a subjective call, of course, but “Joplin’s best rag” might be one of his very first, Maple Leaf Rag.

Maple Leaf Rag was composed by Joplin in 1899. Despite being one of his earliest compositions, it became a model for other ragtime composers.

Maple Leaf Rag and the many beautiful and exciting rags that Joplin subsequently wrote brought him widespread fame and eventually the moniker “King of Ragtime.” Today, Maple Leaf Rag is one of the most famous of rags, probably exceeded only by The Entertainer.

On many of his rags, Joplin wrote:  “Notice! Don’t play this piece fast. It is never right to play ragtime fast.” Despite this directive, Maple Leaf Rag and other Joplin rags became staples of “cutting contests,” battles between piano players attempting to outperform each other, often by playing as fast as possible.

The success of Maple Leaf Rag played a pivotal role in bringing music created by African-Americans into American popular culture. It was a domestic and international hit, although at Joplin’s contracted royalty of $0.01 per sale, it did not make him rich.

Random factoid:  Maple Leaf Rag may have been played by the band on the Titanic’s first (and only) voyage in 1912.

Maple Leaf Rag was central to the ragtime revival that took place in the 1960s and 1970s. In addition to albums, that revival included a TV movie about Joplin’s life, which I saw as a child. I was entranced by the music and promptly went down to the local music store and purchased a book of his complete rags, which I own to this day! Having learned to play Maple Leaf Rag at the tender age of 12 (when musical memory goes deep), I can still reliably perform it by heart even if it’s been a year or more since I last played it.

Maple Leaf Rag and its syncopated rhythms helped establish a new and distinctly American musical style that would later strongly influence jazz. (A syncopated rhythm stresses weaker beats and omits stresses on stronger beats, thus upending listeners’ expectations.) It could even be said that ragtime (via jazz) is a distant ancestor of much of today’s up-tempo pop music.

In 2019, I visited Sedalia, Missouri, where Maple Leaf Rag was first published. Here I am with a plaque that commemorates the location of the building of Joplin’s publisher.

Listen to Scott Joplin’s unique (though considered poor, due to the disease that was soon to claim his life) performance of Maple Leaf Rag as preserved on a piano roll.